Militant Atheism – “There is no God.”

This hostile, rebellious, unholy spirit dwells within the already eternally defeated and humiliated satan himself who was created before the Triune God of the Bible created this natural, physical universe. In eternity past, in the spiritual realm according to God’s truthful Written Word it is revealed about the once arch-angel Lucifer that, “You were blameless in your ways from the day you were created till wickedness was found in you.” Ezekiel 28:15 ~

The first natural appearance of this demonic wickedness is in the Garden of Eden. Through out earthly history this unrepentant adversary of Jesus Christ and those created in His image: mankind; has been in an on-going spiritual conflict with His Creator and the human race. Militant Atheism is the devil’s most virulent manifestation over the centuries. Its present-day forms are revealed in the likes of Bill Maher in the West and the atheistic government leaders of China and North Korea in the East which qualifies them among the Movements | Faces of Tribulation Islamic State of Iraq and Syria (ISIS) – “We love death more than you love life.”

This is yet another manifestation of the defeated and humiliated satan with betrayal added into the hopeless scheme. The misguided devil in his pathetic on-going conflict against the One True Living Triune God of the Bible is dividing his earthly temporal house and according to God’s truthful Written Word, “a house divided against itself, cannot stand.” Mark 3:25 ~

Islam was birthed when Mohammed received a perverted theology from an unclean spiritual authority disguised as an angel of light. Traditional Muslims under this stronghold are politically moderate and go about their business providing for their families. However, their honor and shame cultures are ripe for demonic interference. Satan has betrayed them and his own perverted theology perverting it further with the unclean spirit of Judas. The result of the devil’s desperate scheme: ISIS, listed among the Movements | Faces of Tribulation This is unGodly spirit has introduced hundreds-plus perverted ideologies and philosophies to unsuspecting human hosts across the ages including the centuries-old lie of relativism that is popular to present-day Western cultures. According to God’s truthful Written Word, one of this unclean spiritual ruler’s human hosts uttered it’s most laughable debunked falsehood during the Passion of the Christ when Pontius Pilate asked with a straight face, “What is truth?” John 18:38 ~

This tormented demonic ruler of the Pharisee is especially popular with extremely self-sufficient human hosts who deny God’s involvement in everyday life. Those within the Church of Christ who deny resurrection of the dead are vulnerable spiritually. Throw in those who deny an afterlife, holding that the soul perishes at death, and deny afterlife spiritual penalty or reward; and those who deny the existence of a spiritual world, as is taught by postmodern academics, and there’s a lot of human hosts loose in the world today whose mental thoughts are ruled by the demon Pharisee! This unGodly spirit is an agent of satan. It perverts cultural and social relationships in the minds of unsuspecting human hosts presently across the West. This demon feeds on the centuries-old scab of ethnic injustice that is popular to present-day Western youths. According to God’s truthful Written Word, this demon also symbolizes the arrival of YHWH’s judgment on a nation and people for the spiritually rebellious always reap what they have sown for themselves. If those presently rioting and looting do not come to Yeshua’s Cross of Calvary in repentance and for salvation refusing to live in the enabling supernatural power of His everlasting forgiveness, grace and love there is no other escape but hell for them. It is time they “look to Yeshua and be saved.” Isaiah 45:22 ~

This tormented demonic authority of Nebusaradan is especially popular with extremely self-righteous human hosts who deny God’s soveriegnty in everyday life. Those within nations and people groups who deny any forgiveness for past sins are especially vulnerable spiritually. Throw in those who seek to destroy, those who seek to murder and those who seek to steal resulting in everyone unwittingly doing satan’s bidding. Unless they repent, their names are not found in the Lamb’s Book of Life. 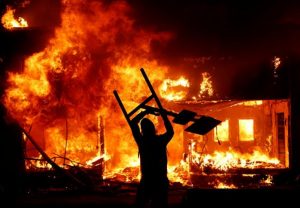 Movements | of the Coming Tribulation

All the above movements presently on earth are lies from hell and you must not accept them! Under any of these demonic strongholds, demonic lies are spoken over a nation and empowering curses come upon the societal institutions and the populace. These opportunistic rebellious spirits want do satan’s work to kill, steal from, and destroy a nation wholesale! They seek to create distrust about God’s Living (Jesus Christ) and Written (the Bible) Words; and, for a person or a nation to let go of a their blessings and embrace demonic curses. Praise Abba YHWH, these unrepentant spirits under satan, along with the devil himself, were defeated and humiliated at the Cross of Calvary by God’s Only Begotten Son: Jesus Christ! Hosanna ~